I posted the full range of Faber Castell Albrecht Dürer pencils here. The beautiful Polychromos pencils are the same colours with the same colour numbers but I thought I'd add this photo as a quick comparison.


Happy painting and drawing!
Posted by Jane Blundell at 15:07 4 comments:

Roman Szmal created a new watercolour range that was launched this year. I have painted out the samples he sent and posted them all here.


He then sent a lovely wooden palette box with space for 36 colours and wondered which I would use to fill it. I thought this lovely palette justified a new post.


It was quite a challenge choosing actually. My largest palettes are 24 colours so adding 12 more meant I had a huge number of variations of each colour. I don't usually have a cool, medium and warm yellow as well as a quinacridone gold. I included two oranges - both gorgeous, and two turquoises and purples. There are seven blues, seven greens and a massive eight earths colours.

Here is the printout of my chosen palette. Far more colours than I need but lots of fun. The mixed greens have quite a few pigments but are really lovely and realistic with interesting granulation. The earths are glowing. Many use variations of PR102 and are interesting and rare earth colours.

Some of the paints are quite soft, others firmer. They are designed to rewet easily and do lift from the palette very nicely. I look forward to exploring them further.


Artur Przybysz's Master Set
A set of 12 colours was released in a palette, shown left. It contains two yellows, two reds and two blues as well as the lovely Natural Sienna Light that I've chosen above, and a PR102 Red Ochre that is a very lovely burnt sienna option. It also has a neutral purple colour called Przybysz' Grey, which is as close as he has to a mixed grey. This was inspired by the Polish artist who helped a lot in the development of these colours.


I've listed the stockists of these paints on my full range post here. Here is an (affiliate) link to Jacksons in the UK. They ship world wide. 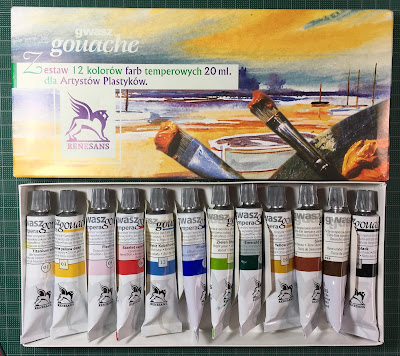 I was sent a set of 12 Renesans gouache tubes to try. These come from Poland, and Renesans make an additional three different ranges of watercolours that I have written about here.

There are 26 colours in this range - a smaller number than in most watercolour ranges but that makes sense. I use a much smaller range of colours in gouache than I do in watercolour as I consider gouache to be an opaque medium so I am not looking for transparent or granulating colours.

It's a workable basic set, though I'd switch in a cool red and a cool blue rather than the Cobalt Blue and the four pigment Burnt Umber. I think I'd also use a Raw Sienna more than Flesh Tint. Many of the colours have a slightly chalky look to them. I assume chalk has been added, as is traditional for gouache, but I may be wrong.

The full range can be seen here and below.

Update
Renesans sent me the missing colours so here is the full range. I have either scanned or photographed these ones, to try to get the best colour match. I'll leave the set information above as it may be useful.

The colours of this set are close to correct, but the scarlet Vermilion Hue looks a little more accurate in the photo above. Alizarine Lake is actually slightly less purple.

These colours have reproduced much better.


The English Red is not quite as crimson as it looks here - it is more like a Quinacridone burnt Scarlet in hue. The others are fairly accurate.

I am gradually adding Gouache samples - use the search button to find other posts.

Posted by Jane Blundell at 22:54 No comments:

ShinHan is a Korean company. I posted a blog about their watercolours here.

I was also sent a set of 6 ShinHan PASS hybrid watercolour/gouache last year and didn't get past painting out some swatches using the fresh paint. The colours were vibrant and strong with various levels of transparency, but at that stage I didn't have a chance to experiment further.


ShinHan sent out some sample boxes and on Saturday, the Sydney Urban Sketchers had the chance to play with the full range of 48 colours.

They are quite a mix, as the set contains some excellent pigments, some fluoro colours, some fugitive pigments and a big range of transparent to opaque paints. They are designed to be able to 'pass' from transparent watercolour through to thicker gouache applications seamlessly.


They are not necessarily produced to be used dried, but as a travel/urban sketcher, it's always something I like to be able to do - set up a palette and take them with me. Since I usually work with dried paint, I find it more easy to control that way. However for those who like using acrylics or fresh paint, using them fresh from the tube would be more familiar.

I painted out the full range and include them here in the order they are shown in the colour chart. The pigment and lightfast information is taken from the same chart.
S = series, where A is the least expensive and E is the most expensive.
The empty square = transparent
Diagonal through the square is semi transparent
Half filled square is semi opaque
Black square is opaque.
The stars relate to the lightfast rating where **** is the highest lightfast and * is the lowest. There are  a number of colours with a rating of * and ** that would not be suitable for framed work but could be used in a sketchbook, where they are protected from light. Very few have been given the highest **** rating.

I noticed that the black line that I drew to compare opacity didn't always match the product information, however it should help to see how transparent they are painted very diluted and then in a creaming wash. The swatches are fairly close to original colours.


These reds are fairly close to the original swatches with the Bright Red being really vibrant. Permanent Red was included in my set of 6 though if you were looking for a primary red the Carmine would be a cleaner mixing option. (note - I've not seen PR17 before nor researched its lightfast rating). The Vermilion Hue is a gorgeous orange but only suitable for a sketchbook or reproduction work. I found the paint easier to control in the dried state and the transitions between using it as a watercolour and using it thicker as a gouache were easier to control.


The brightness of the Yellow Orange and Lemon Yellow really shows up in these photos. Once again the orange is very pretty but the pigments are all going to fade if exposed to light. The Permanent Yellow was in the set of 6 and is a good choice (hue wise) as a primary yellow.

These green swatches are quite close to the greens I like to include in my watercolour palettes - especially the Sap, Viridian Hue (as a mixing green) and Shadow Green.

The lightfast ratings of these blues is lower than I would have expected with these pigments. Cerulean Blue Hue was is the set of 6 and once again was easier to control in the dried form.


It's hard to beat Ultramarine as a warm mixing blues and the granulation is lovely in a wash. Permanent Violet was in the set of 6.


There are some colours that I just have no interest in - flouro pigments and tints being right up there - but they are pretty and the added white pigment of course makes them more opaque.

I like the yellow ochre - it's one of the most useful gouache colours I find. The Raw Umber is listed as PR101 which is most unusual. It comes in many forms but I've never seen it in this hue before. The Light Red is really vibrant.


Burnt Sienna was in the set of 6 and once again was easier to control in dried form. I really like the PBr25 pigment - a rich reddish brown.

Finally Black, Grey and White. These were not as completely opaque as they are listed but would cover a line if a couple of coats were used.

I have set up a palette of 12 colours that I think will work nicely for urban sketching (in a sketchbook) including 5 of the original 6-colour set - White, Permanent Yellow, Permanent Red (though Carmine would be more versatile), Cobalt Blue Hue (though French Ultramarine Deep would be more versatile), Cerulean Blue Hue, Sap Green, Yellow Ochre, Burnt Sienna, Light Red, Vandyke Brown and Black. With Gouache palettes I break all my rules and include black and white! I'll have a play with them and add more comments in time.