I've been using Daniel Smith watercolours since 1995 - just two years after they were first produced. They started with just 18 colours, including quinacridone gold, sap green, new gamboge, yellow ochre and the raw and burnt siennas that I still love today. Over the years I managed to try pretty much every colour they have ever produced, and in 2015 and again in 2017 I went over and visited the factory, taught a number of workshops and met up with many of the wonderful Daniel Smith people. I've met up with the CEO and the Vice President frequently over the years, and have worked with the company exploring ideas and colours. 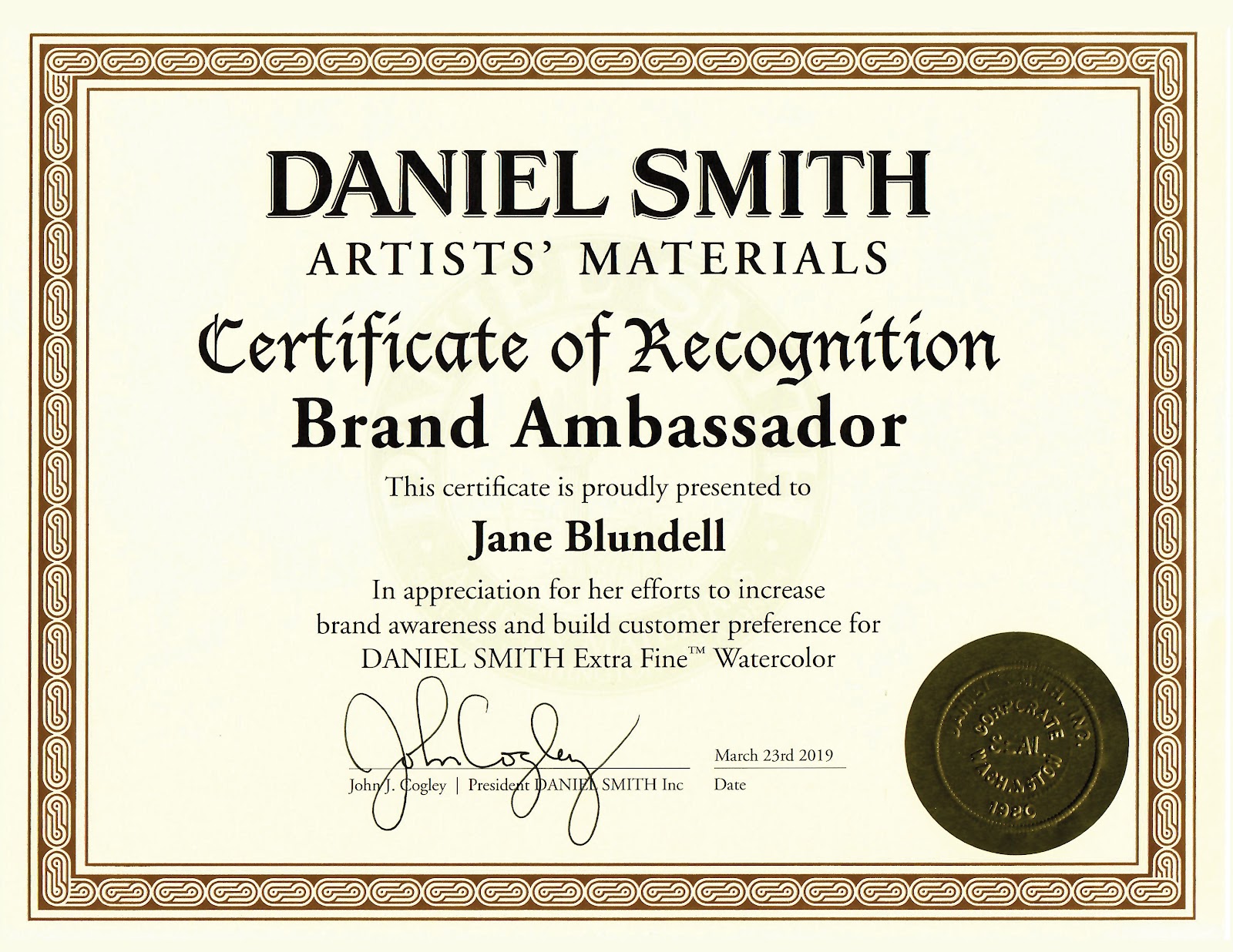 I continue to test out watercolours from all over the world and there are some fabulous brands to be found. But I still use Daniel Smith myself because they work so well for me in the way I like to paint. I am proud to be one of their international team of Brand Ambassadors. Please note that this isn't a paid position, but a recognition of our loyalty to this brand.

The original range expanded to a rather massive 252 colours, including the fascinating Primateks and also the 48 luminescent, pearlescent and interference colours that I won't include here. The following charts are arranged based on the two colour charts I have - the newest and a previous one. Colour reproduction is not bad, but not perfect.

Of course you don't need all these colours and nor have I bought them all. I've bought many of them, collected others as free samples and been sent a few by fellow artists and the Daniel Smith the company - including the 8 new colours added in 2017 and another 8 new colours in 2019. But many have been tested only from the wonderful dot cards that Daniel Smith were the first to produce, such as the Mayan Yellow and many of the other Mayan and earth colours.

I can talk about colours for ever, especially these ones. However I will just include a few comments here about the colours I particularly like or use or recommend a lot. The choices are vast :-)


I love Buff Titanium - think of it as an unbleached white. Lovely granulation and perfect for beaches and sandstone, snow gums and marble. There are quite a few great lemon and mid yellows to enjoy.


Daniel Smith moved away from cadmiums many years ago but I've included some just for comparison. Cadmium colours are very lightfast and fun to use, but I generally prefer more transparent watercolours for the yellows and reds. I particularly like Hansa Yellow Medium - a lovely mid yellow.


Indian Yellow has changed formulation but I haven't tried the new version. Nice pigments though. New Gamboge made with PY153 was a stunning colour.


New Gamboge has also changed formula, since PY153 is not longer available. It's a shame as it's a gorgeous warm yellow pigment so grab any you happen to find if you like the original version. Aussie Red Gold is new this year (2017) and a lovely bright golden orange yellow. Mixes lovely greens with a range of blues. Hansa Yellow Deep is another excellent single pigment warm yellow option, that works very nicely as a pair with Hansa Yellow Light for those wanting a cool and a warm yellow.


I love orange, but don't tend to have it in my palette since it is easy to mix. Shown here is the old version of Transparent Pyrrol Orange, which is what I use personally as a warm red. It has changed to a gorgeous mid-orange that is the perfect neutralising opposite for Ultramarine. The new version isn't shown here.


My favourite of all these scarlets is Pyrrol Scarlet - bright and beautiful. Quinacridone Coral really is a coral colour though it doesn't quite look coral on my screen - called quinacridone red by many other brands that use the PR209 pigment.


While I don't choose to have a mid red in my palette, there are plenty to choose from. I like the Pyrrol Red best.


Quinacridone Red is very like Quinacridone Rose though slightly richer. I have only tried Mayan Red from a DS dot so this may not be a fair indication of its true character. While I don't use the fugitive Alizarin Crimson, I am glad we can still buy it to see what all the fuss is about. Rhodonite starts more of a rose when freshly painted but becomes more magenta with exposure to oxygen.


I rather like Carmine as a great 'primary' red, though I tend to use Quinacridone Rose more often. The new Rose Madder Permanent is closer to the original Rose Madder pink, but it won't fade. I know many love Opera Rose, but it will fade.


Many of the Daniel Smith quinacridone colours are very similar. I particularly love Quinacridone Rose as a gorgeous rose pink but also to mix amazing purples. The new Quinacridone Lilac (called Quin Magenta in many other ranges) is also excellent for this purpose, and as a primary red. Pyrrol Crimson is a palette basic for me.


I tend to mix my own purples, but there are some lovely granulating pigments that can add texture to your paintings. PV49, PV14 are never powerful colours, but have interesting granulation.


...and nor is PV15. But mixing Ultramarine with PV19 creates fabulous strong and granulating purples.


The photograph doesn't capture the beauty of the Amethyst, which, like many of the Primateks, has a touch of sparkle. It's a powerful but slightly neutralised deep purple. I love the crazy granulation of the three-pigment Moonglow - the rose floats, the viridian speckles and the ultramarine granulates - it is rather fun to play with. Shadow Violet is similar but cooler.


There are so many gorgeous blue pigments! I love the richness of Indanthrone blue and the granulation of Sodalite. It can be used as a great shadow colour, or for fabulous stormy skies.


Ultramarine is a palette staple for me, but I also love Cobalt Blue.


Phthalo Blue Green and Red Shades behave in a similar manner - you can see there that the Red Shade is definitely warmer. I generally suggest the Green Shade if you want it to be your cool blue.

Cobalt turquoise is wonderful mixed with a little yellow when you want to create the look of oxidised copper! It's also lovely for seascapes, as are all the cool blues. I love the granulation of Blue Apatite Genuine and Lunar Blue (so many lovely blues!)


Phthalo Green Blue Shade is another of my basic colours. I doubt I've ever used it alone, but it's great for mixing. Viridian is very similar in colour but much less powerful and less staining and has lovely granulation.


Jadeite is a lovely alternative for those who don't want to use the often overpowering phthalo green. As a cool green, it mixes in a similar way, but with granulating and a bit more of a realistic look.


In 2015, PO49 was replaced in DS mixes with the hue made from PO48+PY150. The new version of Sap Green is shown below. I love Serpentine Genuine - not just because it also comes from Australia, but because it creates a grassy meadow in one wash :-)


Green Apatite Genuine is a remarkable paint as it will create soft greens, grassy greens and deep olive greens depending how thickly is it applied - excellent in a limited or plein air palette. Perylene green is fabulous - another of my basic palette colours.


Sap Green, Undersea Green, Perylene Green and, for mixing, Phthalo Green work really well for me, but I love the amazing range of realistic greens available.


There are a lot of yellow earth options. I'm not quite sure what the difference is between some of them. I like to use Raw Sienna, Yellow Ochre and Goethite. Mont Amiata Natural Sienna is very pretty. I quite like Mars Yellow too :-) I haven't explored the new Raw Sienna Light much yet...


I love Raw Sienna for the glow of sunsets in the sky. It's also useful for skin tones. I tend to have Yellow Ochre, Raw Sienna, Quinacridone Gold and Goethite in my palette. Quinacridone Gold was one of the first Daniel Smith watercolours I bought back in 1995. I still love it. As this pigment is no longer available, the new hue has been produced (see below).


The Quinacridone Gold hue that is used in mix many of the DS colours now is very close to the genuine PO49. I love earthy colours. I especially love the unique Goethite for its amazing granulation.


Lunar Earth is one of the most incredible granulating colours. Granulation is something Daniel Smith does so well :-)


I love the earth colours. I tend to have a yellow earth, an orange earth and a red earth at least in my palette, and I love the most opaque of watercolours Indian Red as a red earth.


So many amazing colours...Quinacridone Burnt Scarlet is also known as brown madder.


Piemontite is another favourite 'extra' colour. It is a bit like an Indian Red but has a gorgeous dusty rose undertone. The primateks are so interesting.

Transparent Red Oxide is one of my absolute favourite watercolours - the perfect colour for rust, which I love to paint, or as an alternative for Burnt Sienna. Though I tend to have both. Permanent Brown is also an interesting non-granulating red-brown.


Burnt Sienna as a palette staple and I love this version - PBr7 rather than the common PR101 burnt orange version. Burnt Umber is a lovely classic watercolour - a rich warm brown. I love the granulation of the Enviro-friendly watercolours. The EF Brown Iron Oxide is excellent as a really granulating burnt umber option.


Raw Umber is a colour I use a lot as a cool dark brown, and I usually include it in a palette of 12 or more as it is not an easy cool dark brown to mix on the fly.


And now for some darks. I don't tend to use black in watercolours but the Graphite Gray is like working with liquid pencil - lovely! I make my own Jane's Black and Jane's Grey (added to the range in 2019 - see below) for my darks.


I thought Yavapai Genuine might have been discontinued as it was missing from the previous colour chart but it's on the new one and here it is - out of order! Lunar Black makes me break all my not-using-black rules, (it's an extra colour I have fun with), just as Buff titanium puts a white pigment in my palette :-) Titanium white is whiter and more opaque than Chinese White I think.

Eight new colours have just been added to the DS range - another Primatek, six Signature mixes and a new single pigment grey. I've written more about them here. Though of course I am particularly delighted with my signature series colour Jane's Grey :-)


I'll finish with a few that have been discontinued some time ago but I'll show them anyway as it's rather nice to know what they looked like...
As always, if you notice any errors, do let me know.
Happy painting :-)


Search for more watercolour ranges in the search bar.
Posted by Jane Blundell at 05:11