Holbein from Japan has been making watercolour since the early1920s. They don't contain any ox-gall, animal products or dispersing agents so are easy to control. They claim that the pigments are more finely ground than in other ranges and describe themselves as " a European style transparent watercolor which preserves the brush handling qulaities inherent in Japanese watercolor techniques". They generally rewet beautifully from the samples I have received so can be used fresh from the tube or dry in the palette.

The 2017 colour chart shows 108 colours, without the pigment information. They are available in 5ml and 15ml tubes and some pan colours. Note in this range there are only a possible three stars for lightfastness. I found a link to the pigment information here so have updated the pigments in the captions. Many of the problem fugitive colours have been reformulated :-) but there are a lot of two and three-pigment mixes.

The colour chart also shows a series of symbols
T = Transparent,
N = Non stain
E = Easy lift
H = hard lift
X = granulating
B = Semi transparent
O = opaque
S = Staining
I = intense.
I've added this information to the swatches, though sometimes it seems contradictory.
2018 update
I was told about these dot cards being available so have been able to update these swatches to include the full current range. These charts also have pigment information so are really helpful. Where I have swatches of the old and the new colour I've included both. The swatches are arranged according to the 2017 colour chart. 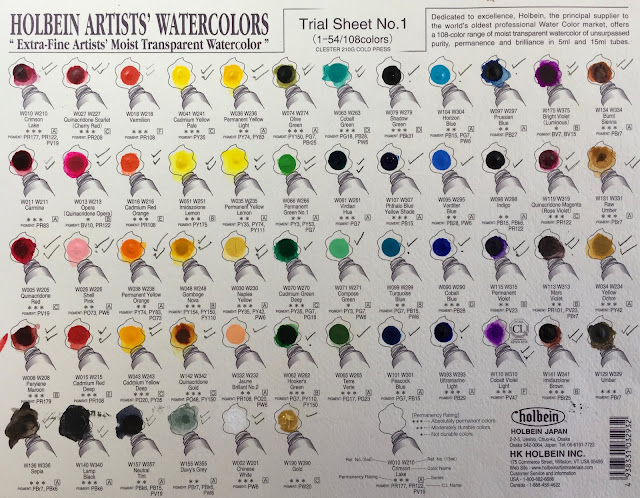 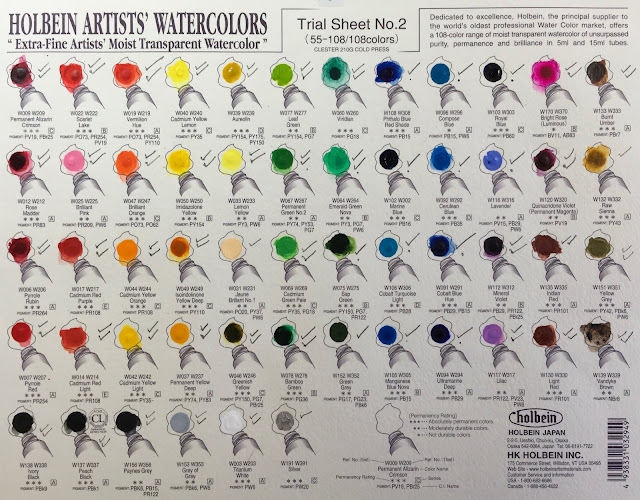 I always avoid PR83. The other less lightfast pigment, PT23, has been removed from the range.


This is a really orange version of PR108 in Cadmium Red Orange!

Both ultramarines are rich and gorgeous.


These earth colours are nice. Less granulating than some brands.

Use the search button to see other watercolour ranges.