A. Gallo Hand Made Watercolours

A. Gallo watercolours come from Assisi, Italy. This is a honey-based range, created to be highly lightfast and free of mercury, lead, arsenic, cobalt and cadmium. I originally tried the full range in September 2021. As of 2022, these hand-made colours are available in individual half pans in 86 colours, or a range of interesting sets.
The Signature set from 2021 is shown below. There are also various collections and some lovely wooden palettes as part of a limited edition range. This is a range created with passion. A new brick and mortar shop has opened in Assisi for those travelling. They are also available from Jacksonsart (affiliate link) who ship world wide.

The pans are wrapped in watercolour paper with the colour sample brushed over it and the presentation is gorgeous. The website is very clear and the printouts in the colour chart are so well done that I almost felt I didn't need to add the swatches here. There are some lovely primary colours and interesting purple mixes. Interestingly, about half the range is made up of realistic greens and earth colours. I've updated these swatches to include the new colours added, and removed those that have been discontinued.

Permanent Carmine was one of the most lovely to paint out - a beautiful example of this really useful primary red.
Not many companies include genuine Rose Madder. This is an earthy coral-pink version. Dragon's Blood looks a little like Perylene Maroon.
It is wonderful to see YInMn Blue and Lapis Lazuli in this range. YInMn Blue is the newest pigment to have been discovered - in 2009 - and Lapis is often a very washed-out colour - a far cry from its original form.

I found some colours were best used in a very liquid state - painting with a 'cream' consistency lost some of the glow.

I've added all these painted swatches to my website, arranged by colour and pigment.

Kremer Pigmente has been providing a huge range of pigments for many purposes since 1977. They
stock pigments, ready-made colours, mediums, binders, glues, gold and guilding materials and many more. I visited a store in New York many years ago but they were out of stock of the colours I was most interested in trying. I was delighted to be contacted to try out some of their hand-made watercolour sets. 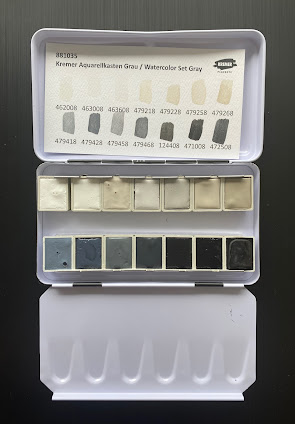 There are 132 individual watercolours shown on the website, including a number of Iriodin glitter and pearl colours, and a number of boxed sets including an Earth set, a Pearl Luster set, an Illumination set, a gold Retouching set and other interesting options.
The sets are in black metal palettes with the Kremer logo. They have 14 colours. The first I'll show here is the Watercolour Set Gray. Originally designed for retouching photos, artists have enjoyed this set too. It includes single pigment blacks and whites but also a number of mixes - all the greys - which is unusual as most Kremer watercolours are made with a single pigment. The warm greys are mixtures of Zinc White and Raw Umber and the cool greys are mixtures of either Zinc White and Furnace Black or Kremer White and Furnace Black.
One side of the enclosed card has the hand-painted colour swatches and numbers and the other has the numbers with the pigment information.

Since I don't often work with black and white pigments, I find this an intriguing set, and will eventually test it out on toned paper, working with limited number of paints for each study.

The colours are as follows. 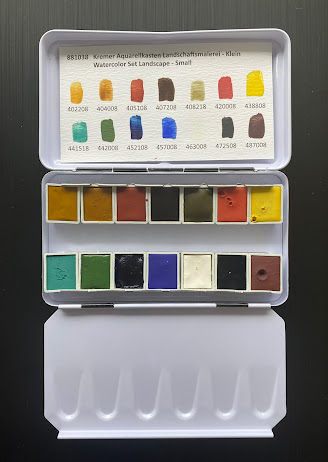 Watercolour landscape Set - Small, contains 14 half pans of a really interesting range of colours. It was inspired by the palette of the 19th Century landscape paintings. I'll add more detail about each colour, thanks to information from Eva from Kremer, below.
Due to the pigments choices, it is not a general purpose set as there isn't a bright cool red, so it isn't possible to make bright purples, however they are not usually needed in a landscape set. It would also work well for Urban Sketching. See image below.

The colours are a little less bright and many are more opaque than the modern colours I'd normally use so it would be an interesting set to use on toned paper.

Italian Gold Ochre Light, Raw Sienna, Venetian Red, Burnt Umber and Green Earth from Verona  are all earth pigments. 'Natural earths have a larger particle size than synthetic pigments and every earth colour is an individual mix of natural minerals. Hiding power (opacity) and tinting strength can very depending on the type of earth and its composition. Raw Sienna and green earths are typically transparent pigments, while burnt umber can have more hiding power, though it will never be as opaque as synthetic iron oxide'. (See Caput Mortuum below.)

Italian Gold Ochre Light is a lovely yellow ochre colour and painted out beautifully. Raw Sienna was a little more difficult to get smooth - interesting that these are both PY43. I'd have to explore how they mix as I often use a PBr7 Raw Sienna for a glow in the sky. Venetian Red is more pink than usual, almost like a more gentle and more transparent Indian red.

The set was originally created using only the pigments that were typical of the 19th century, but with the restriction on chromate pigments, barium chromate has been replaced with Intensive Yellow (PY159). Intensive yellow is an 'inorganic zirconium-praseodymium-silicate, which is inert and non-toxic'.
The red in the set is Vermillion (PR106). 'Synthetic mercury sulphide was produced since the 8th century and has been the only permanent and intense red until the first alternatives came up in the 19th Century. It is a very heavy pigment with strong hiding power. Typical for vermilion (and natural cinnabar) the colour of this pigment depends on the particle size. Finer particles are more orange-red, which later ones are darker. The earlier settling of the larger, darker particles can also be observed ed in this paint during use.'
The yellow and red are a little more dull than in most modern sets and would suit landscape painting.
The greens would mix with the three yellows to create a range of useful foliage greens. Cobalt Blue and Cobalt Green pigments were discovered in the early 18th century. Both the Cobalt Green Bluish and the Cobalt Dark Blue have a strong tendency to granulate in watercolours.
'Chrome Oxide Green was also discovered in the 19th Century but has not lost its importance ever since. This pigment is very fine and has excellent hidden power, but its slightly broken green shade makes it ideal for depicting nature and landscapes.'
Paris Blue, often knows as Prussian Blue, Milori Blue or Berlin Blue, was discovered early in the 18th Century. It was 'one of the first pigments produced industrially and it did not lose its importance throughout the 19th Century.' Is a very dark intense blue pigment that gets greener if used in glazes. 'Paris Blue was used traditionally in mixtures with yellow ochres, iron orchids or chromate yellows to achieve green shades. It is not recommended to mix it with white pigments as these can cause it to fade.' It is a deeper cool blue than phthalo blue. It is also less staining so a bit more forgiving than phthalo blue.
It is unusual to see a Cobalt Dark Blue rather than Ultramarine (discovered around 1826) in a curated set. It's a lovely warm blue colour, but an expensive pigment. As mentioned, Cobalt Blues and Greens were discovered in the early 18th Century.
Zinc White is included in this set instead of the toxic lean white that was in use until the last 18th Century. It is a semi-transparent pigment to it is more suitable for mixing then the opaque and dominant titanium White.
Furnace Black or Lamp Black is a very fine pigment with high tinting strength that can be used for transparent glazes as well as more opaque layers. Lamp black mixes well with other colours too. 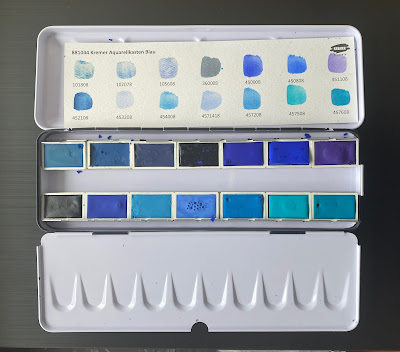 The third set is Watercolour Set Blue - 14 full pans of blues, including some rare and special colours.
PB30 is not a pigment number I remember seeing before, but azurite my not always be given a pigment number. It's a very granulating blue to slightly greenish blue. The two versions are quite different. Lapis Lazuli is a very expensive pigment that varies a lot from manufacturer to manufacturer. This is  areasonably rich version, though not as rich as the lovely Ultramarine Very Dark. Genuine Indigo (Natural Blue) is not considered lightfast, but it is always great to see the real pigment, even if you only use it in a sketchbook.

These are all cobalt colours made with PB28 or PB36. Gorgeous and granulating, they are lovely to explore.
I also received samples of Yellow, Greenish (PY129), which is a synthetic-organic azo-pigment. I find PY129 an interesting option as a cool yellow in mixing, as I don't usually include a high chroma cool yellow in my palettes. It is also a pigment that is useful to paint the glow of light through foliage or to mix with blues to create more greens.
Red Bole (PR102) was made specifically for another Kremer set - a Gold Retouching Colours set that also includes a number of sparkling colours. Red Bole is traditionally used in water gilding to make red poliment, which was layered under the gold leaf to make it easier to burnish and to give a warm feel tot he gold. 'Red Bole is a natural red earth colour with a high clay content. This type of earth is rarely used in paints, because its clay content makes this earth a little bit sticky or smeary'. The Gold Retouching Set was created with colours 'chosen to allow the conservator the widest range of shades from yellow to red to imitate the poliment colours that may occur in an historic gilded object'. So it wasn't intended for painting, but it a lovely earth orange-red watercolour colour.
Happy painting :-)