I'm delighted to announce a solo exhibition at Gallery 11:11, a wonderful teaching studio and exhibition space in Epping, Sydney. The exhibition, Drawn to Nature, runs from the 16th October to the 30th October 2021, with in-person and online viewing options available. Wherever you are in the world, you can have a look :-) 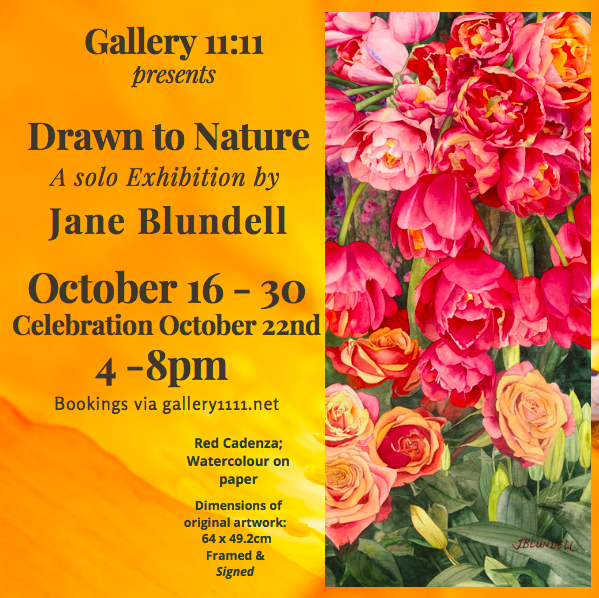 I'll be showing more than 20 watercolours, all inspired by nature. In this exhibition I have really focused on the beauty of the natural world, especially flowers, so it will be an explosion of colour.

This exhibition contains a mix of original works on paper or canvas, and limited edition Giclée prints. There will also be a display of my sketchbooks, showing some of the original sketches created on location in the same space as the final paintings.

“My art inspiration and ideas come largely from the natural world – flowers, trees, rocks, people and landscapes – and I prefer to work from life, beginning with drawing. I enjoy the challenges of abstraction and incorporate abstracted backgrounds and features into many of my paintings.

My work covers a range of media – watercolour, pen and ink, collage, pastels, acrylic, oils and etching – often incorporating several into a single work. Of all these media, my favourite is watercolour, which I have been exploring for over 40 years. It is a remarkable medium that allows the qualities of the pigments to become an integral part of the painting, rather than just the addition of colour. I am constantly searching for new ways to incorporate watercolours and watercolour techniques into my art, including works with watercolour on canvas.”

Booking link - book a time to see the exhibition, then send an email to make it a Zoom visit.

I've added a video walkthrough to my Instagram account Janeblundellart for those who can't see it in person. To see the paintings click here.
Posted by Jane Blundell at 22:27 14 comments:

A. Gallo Hand Made Watercolours

A. Gallo watercolours come from Assisi, Italy. This is a honey-based range, created to be highly lightfast and free of mercury, lead, arsenic, cobalt and cadmium. These hand-made colours are available in individual half pans, or a range of interesting sets.
There is a Naturale set of 24, or two 12-colour Naturale sets; there is a signature 12 or 24 set - the 24 set is shown below; there are various collections. There are also some lovely wooden palettes as part of a limited edition range. This is a range created with passion. A new shop is about to open in Assisi so I wish them well. They are also available from Jacksonsart (affiliate link) who ship world wide. 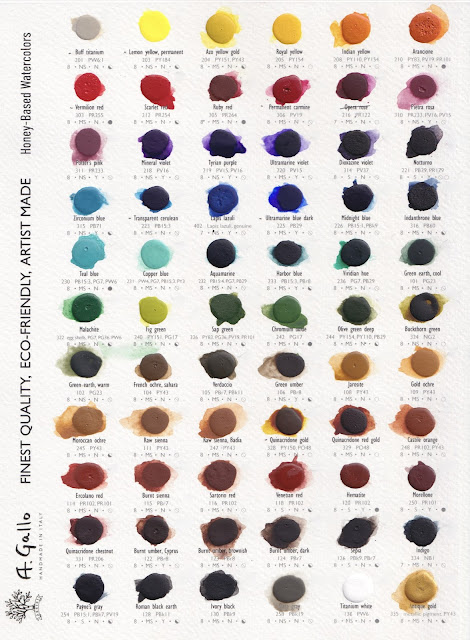 The pans are wrapped in watercolour paper with the colour sample brushed over it and the presentation is gorgeous. The website is very clear and the printouts in the colour chart are so well done that I almost felt I didn't need to add the swatches here. There are some lovely primary colours and interesting purple mixes. Interestingly, about half the range is made up of realistic greens and earth colours.

Permanent Carmine was one of the most lovely to paint out - a beautiful example of this really useful primary red.

It is wonderful to see YInMn Blue and Lapis Lazuli in this range. YInMn Blue is the newest pigment to have been discovered - in 2009 - and Lapis is often a very washed-out colour -a far cry from its original form.

I found some colours were best used in a very liquid state - painting with a 'cream' consistency lost some of the glow.

This blog was originally from 4th December 2017, but I've updated it with another sample of this interesting pigment.

I was so excited when I heard that a new pigment had been discovered. Like many pigments, it was discovered or created by accident, back in 2009, in Oregon State University. The Professor's name is Mas Subramanian.

The name of the pigment comes from the chemicals that form this colour - Yttrium, Indium and Manganese.

Manganese oxide is normally black, Yttrium and Indium are yellow and white, so creating a blue when they were heated was a total surprise! It is a stable and non-toxic inorganic pigment, that reflects heat and absorbs ultraviolet so may be used for insulation.

The colour is described as being between ultramarine and cobalt blue. It is also compared with cobalt deep blue. I think of it as rather like a granulating Indanthrone blue - like a mix of PB60 and PB74. Very beautiful.

I've been curiously watching for it to be made into a paint. I saw an acrylic limited edition made by Matisse, and an oil version made by Gamblin but these were described as very opaque paints. Here it is in watercolour. The granulation really makes it something special.

I've tried to adjust to get the colour accurate but it is just a little more dull or greyed than it looks on my screen.

The pigment originally cost about 6 times more than cobalt or cerulean pigments due to the cost of the rare earth element Indium. It was not necessarily likely to be made as a watercolour...

This was a Daniel Smith R&D sample and it was thought that as it is really expensive, it may not be developed further.
Since then, this pigment has begun to trickle out in various forms and many other companies are exploring it. It is available from Kremer pigments, and Golden did some custom testing. Derivan has a acrylic version in their Matisse range and it is also available in oils. I'd only be interested in this pigment for its granulation, which shows up in watercolour.
The first sample is the Daniel Smith R&D versions. The second watercolour sample is from A.Gallo, a hand-made Italian brand. Schmincke has also released a version, added below. You can find it here (affiliate link). Interesting how different these first two samples are in colour - scanned together. The third sample was scanned separately but with the same scanner, as was the fourth sample from Kremer. You can find that here.

I've updated this post from 2018, re-scanning all the swatches and setting them out more clearly.
There are many brands of water-soluble pencils, but Albrecht Dürer, made by Faber Castell, are my favourites of the readily available ranges. They are great colours - very natural - and 'fairly' to 'extremely' lightfast. There is sometimes a shift in colour when you wet them but not as crazy as some pencils. They behave well and dilute nicely.

I've had a lovely boxed set of 80 Albrecht Dürer watercolour pencils for over 30 years and use them mostly in conjunction with other media - watercolours in particular. The current range is 120 pencils and I thought I'd draw and paint them all out to show how they all look since the colour charts can be hard to tell. I've taken screen shots of the colour chart from the Faber-Castell website to enlarge them here. I'll show the colours painted and drawn out below, but in a different order.

The samples are drawn on Arches 300gsm hot pressed (smooth) paper - not what I usually use as I prefer cold pressed. The right side of each swatch has been brushed over with water then the pencil drawn through the damp section to show its full wet strength.

The Faber Castell Polychomos pencils can be seen in a blog post here. They are also gorgeous to use, and are the same colours with the same numbers, which is very helpful! As are the Pitt pastel colours and even the Pitt artist pens. This makes it really easy to find a favourite colour across the Faber Castell range. I've also added the full range of all pencils in alphabetical order to the end of this post.
As I have had some colours for 30 years, I've also added the newer versions of these colours next to each swatch. In some cases the colour has changed more than others. I've included the discontinued colours I have for reference.

As always, some colours are very difficult to scan accurately. The new version of #104 is not noticeably different, but the swatch is added here.

A number of these have slightly changed in hue and name so the newer versions are also shown.


I find the change in 134 a little odd as the Magenta is now called Crimson, though is more of a mauve - perhaps a translation glitch.
There is quite a change between the old Red Violet 136 and the new Red violet 194.

I find many of these more natural greens really useful.

The names of the 'flesh' colours have been changed and are far useful. I've used these mostly for botanical colours.

While there are many sets (affiliate link) available of 12, 24, 36 and so on, they don't necessarily have the most useful selections, often being really bright so less useful for realistic work.
I'd suggest the following set, bought as individual pencils. This set fairly closely matches my suggested 20-colour watercolour palette colours, along with a convenience purple, orange, black and white. Add your own favourites of course!
There are wonderful storage options available for loose pencils from Derwent, Global (affiliate link) and others that are more portable than a tin or a box. While I have a boxed set of these pencils for my studio, I also have a great Global art pencil roll with my most used 30 colours so I can have them with me when travelling, and a book-style leather pencil holder for my Museum pencils. 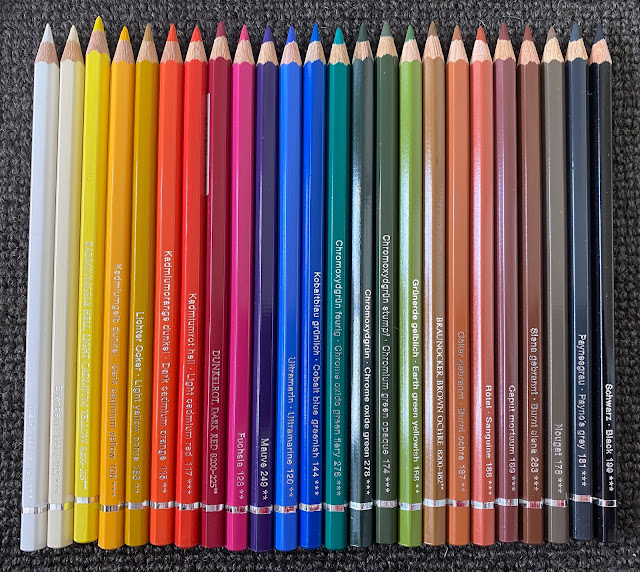 Here is the full colour range of art and graphic pencils - arranged by number. It is interesting to see when certain colours were added. 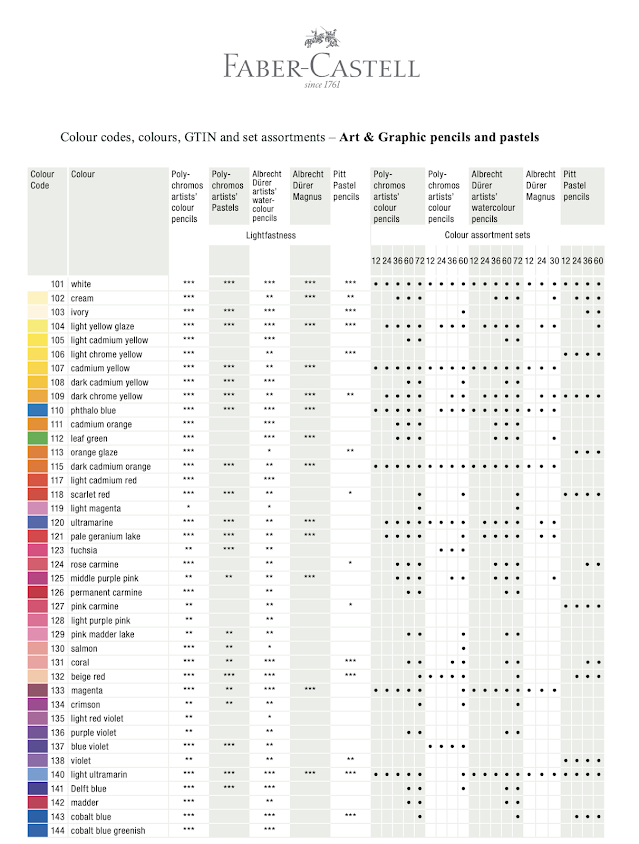 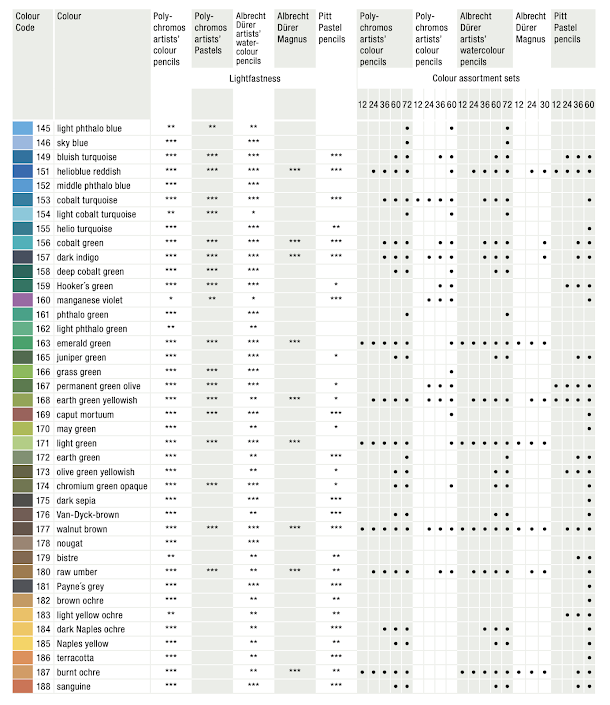