I recently had the opportunity to test out the paints in a paintbox that probably dates back to the from the 1890s. I don't know the exact date nor how recently the paints might have been updated, but it was rather fun to see that mostly they still rewet nicely. 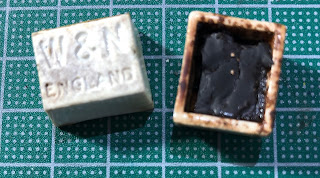 The paints are in ceramic half pans, with W&N ENGLAND stamped on the bottom. How lovely! It would be great to be able to get those again...

Some had labels on them, which might help with dating them I suppose.


The colours painted out nicely once any crud was scrubbed off the top. I've used the names that were on the labels where there were labels and guessed otherwise. The information on the bottom of each swatch is from a Winsor & Newton catalogue from perhaps1894 that was with the watercolour box.

Here they are painted out..

The Gamboge was made from the gum resin from Cambodia, and is not lightfast. The second yellow was really lovely. I am guessing it is Cadmium Yellow. Both Rose Madder Alizarin and Alizarin Crimson were far more delicate than I suspect they would originally have been. Rose Madder Alizarin is not mentioned in the catalogue so may date from later years.


New Blue is a version of Ultramarine but I am just guessing that the third blue is Prussian Blue rather than cerulean. It paints out rather chalky but looks like Prussian Blue in the pan. It could be Antwerp Blue, which is described as 'a weak variety of Prussian Blue containing Alunina'.

Hooker's Green would fade, or rather turn blue, due to the fugitive gamboge in the mix. Emerald Green is an 'aceto-arsenite of copper' so not exactly healthy. Terre Verte is the natural earth - hard to find the genuine article these days. Sap green is made with natural sap green (a fugitive pigment) and a green lake. Green Lakes were made from combinations of Quecitron Lake and Prussian Blue.


Yellow ochre is a bit of a surprise - not as yellow as I'd have expected as I wouldn't expect this colour to change over the years. Burnt sienna was lovely - I'm sure this is a natural PBr7 version. Light Red and Indian Red are also lovely.


There were two half pans of raw umber and they were slightly different. It is described as 'Native Umber of very fine quality, and possessing the greenish cast of colour which is much prized by Artists'. The warmer Burnt Umber was there and I am guessing the other is Vandyke Brown - made with 'native earth prepared for painting'


Payne's Grey had already changed rom the original yellow ochre, Prussian blue and crimson lake formula that I understand William Payne devised and was made with Indigo, Cochineal Lake and Carbon Black. The same mix was used for what I assume to be Neutral Tint.

*Quotes are from the Catalogue - 'Winsor & Newton Limited. Manufacturing Artists' Colourmen by special appointment to Her Majesty and to their Royal Highnesses the Prince and Princess of Wales'.

As anyone who's been reading my blog would know, this is one of my favourite mixing pairs. This combination of two neutralising pigments make a wonderful range of beautiful hues, from warm navy blues to deep burnt umbers and a lovely range of greys.

While many people mix their own variations of this common two-pigment mix, I decided many years ago to pre-mix it and have it available in my palette as a convenience grey rather than mix it on the fly every time I needed it. This allows darker and stronger greys to be used more quickly, which saives time when painting en plein air.

I posted the recipe and instructions to make my particular version - Jane's Grey. I'd been putting it in my students' palettes for years and had to name it something. I rather liked the pun on Payne's Grey :-) 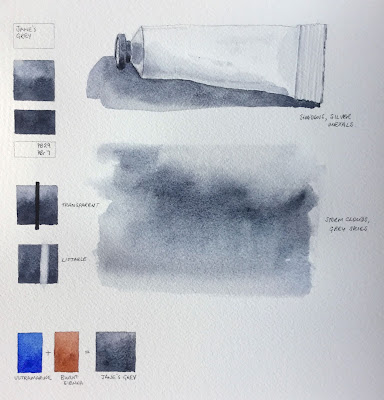 But unlike almost all greys available commercially, Jane's Grey doesn't have black in it. It is made with two liftable (non-staining) pigments so it is itself liftable. This makes it easier to lift out clouds in a stormy sky or soften shadows or lift out highlights.

It is also granulating which is rather nice, and without the often deadening effect of a black pigment it stays lively on the paper. 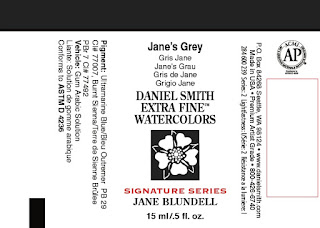 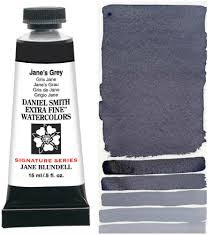 Needless to say, I use it all the time. Burnt Sienna and Ultramarine are such palette staples that it always works in any of my paintings or sketches.

It is available world wide, but here is an affiliate link for Jackson's in the UK.


In mixing it acts as a neutral tint, darkening other colours without changing them.