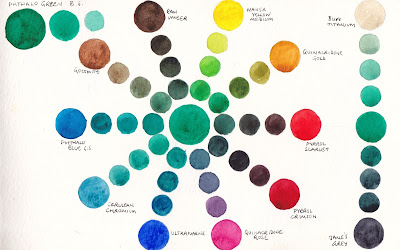 I recently wrote a post about mixing with Phthalo Green BS - a basic palette colour for me and one of my recommended Ultimate Mixing Palette colours.

I love the strength of this pigment, but I thought I would add some other wheels I have done showing this pigment as well as some of the alternative single pigment greens, and demonstrating how they mix with some basic colours.

Here is another colour wheel created using Phthalo Green while I was exploring different palette colours to find the most useful basic set. Here I was experimenting with Transparent Red Oxide as a burnt sienna option, and with lovely DS Permanent Alizarin though I later switched to the very similar but single pigment Pyrrol Crimson as my crimson choice. I also decided on Quinacridone Rose rather than a magenta or violet.

Green Apatite Genuine is a little like the two great Daniel Smith convenience mixes Sap Green and Undersea Green - a remarkable paint. This is another colour I love as an 'extra' for when I want a more granulating effect in a painting or sketch.

Below is wheel showing the Daniel Smith primatek watercolour Jadeite Genuine. It is a gorgeous granulating green that is similar in mixes to the phthalo green, though with granulation. In masstone it can be very dark, rather like a Perylene green. In this chart I was exploring mixes with a custom mixed Quinacridone Magenta that I made by mixing DS Quinacridone Rose with  DS Quinacridone Violet, both PV19. I was also exploring the very granulating Transparent Red Oxide as a burnt sienna option. I love Transparent Red Oxide and use it a lot in my paintings but it is an 'extra' as there are many times when I want the more sedately behaved Burnt Sienna (see that in mixes here.) Mixed with a crimson, in this case Permanent Alizarin, Jadeite will also create a rich black. I love the granulating turquoise hues Jadeite makes with Cerulean and Ultramarine.


Viridian is a much softer, granulating and less staining alternative to Phthalo Green BS. Made with PG18, here is Da Vinci Viridian mixed with a number of other possible palette colours. Once again I was exploring the granulating Transparent Red Oxide with the granulating Viridian.

I have created many charts and wheels in my colour explorations. You can see more here and by searching Sketchbook Pages in my Blog.
Posted by Jane Blundell at 18:45