October has been a big month! I completed my third course, the extension watercolour course Special Effects in Watercolour, last Tuesday. My solo exhibition 'Drawn To Nature' ended on Saturday and last Wednesday I published my new book - Watercolour Triads.

My first book, Watercolour Mixing Charts, began when I found a stack of slightly water-damaged watercolour mixing charts in an art shop in Singapore over twenty years ago. They were blank watercolour charts designed by Michal Wilcox, printed on watercolour paper, and I bought the whole stock - hundreds of them.

I began creating charts of my watercolours, exploring the various mixes. I created almost a hundred of them, but started creating extra charts on each one to show variations. I tried mixing every colour I had with every other colour. I found it a really interesting process, and discovered some amazing and surprising two-colour mixes along the way. I put the charts into a cover I had painted - which later became the cover of the book - and kept them in my studio.

Much later, in 2012, I added those charts to my website and created a book so people could have them handy.

That book has dozens of colours mixed with dozens more colours, so it's interesting for those who have loads of colours, but I wanted to create a more focused reference book using a more limited palette. This was designed for people to be able to replicate.

I did a whole lot of experimenting using two-colour mixes to choose the most versatile colours. Twelve wasn't enough to do all that I wanted and I ended up with my 15 colour Ultimate Mixing Set. I created all the charts, mixing every colour with every other colour, then a large number of interesting three-colour mixes.  I painted all the charts in two A5 Moleskine watercolour notebooks. While convenient to keep them together, it was a laborious task to have each page photographed. Those charts were published as The Ultimate Mixing Palette: a World of Colours in 2015. I created the cover using the 15 colours, to match the style of the previous cover. Later, Daniel Smith released the 15 colours Ultimate Mixing Set, including my custom mixed Jane's Grey, in a plastic travel palette. They are a terrific set to begin a watercolour journey.

I created my first totally online course Mastering Watercolours using the Daniel Smith 15-colour Ultimate Mixing Set, and the book was very helpful. However I knew another was needed.

Watercolour Triads follows from The Ultimate Mixing Palette - it begins with the same 15 colours but this time exploring them in triads. The book includes 34 different watercolour triads painted in colour wheels, including all the bright primary triad combinations, and then a number of interesting earth triads. I've also included some three-colour charts, and wheels showing interesting secondary and other non-primary triads, and some sample paintings and studies to show the triads in action.

I started work on this book years ago - I've been teaching about working with triads for many years and have had a section on my website with some examples. I had painted many of the wheels in more A5 notebooks but decided to do them all again on full sheets of Fabriano Artistico extra white paper to make them easier to photograph and colour match. I've created my own stencils for the charts and wheels so they were a joy to draw up :-)

Here are four of those sheets under way. The charts show the three-colours greens, oranges/browns, purples and greys that can be created with each wheel. 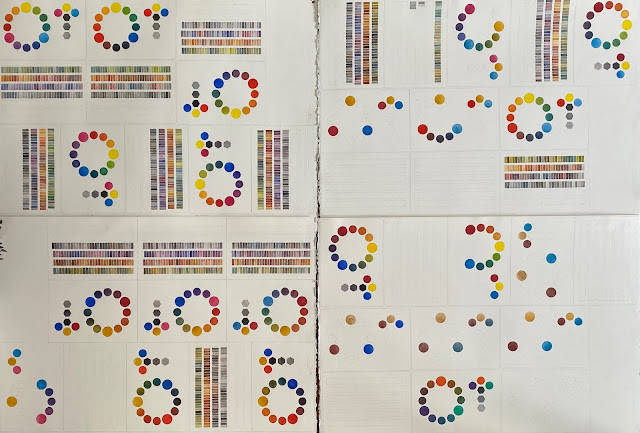 Painting the charts and wheels took many months, but getting the book fully written took even longer. I carefully cross-referenced each mix with The Ultimate Mixing Palette to make it easier to use the books together. The cover, designed to follow the theme of the other two, was painted in just three colours - the triad I call a Basic Primary Triad - Hansa Yellow Medium, Quinacridone Rose and Ultramarine.
My books are self-published through Blurb.com. There are Blurb sites in Australia, the UK, the US, and Europe so you can compare currency and shipping costs. They are available in hardcover image-wrap or as softcover printed books, or as eBooks for Apple or Kindle devices. I plan to create an index for each book as a separate PDF.
This book completes this reference series. I have two other art books in mind for the future, but I don't plan on starting work on them for a little while. Eventually I'd like to create another children's book too.
Happy painting :-)
Posted by Jane Blundell at 22:12