I remember coming across a reference to the Zorn palette some time ago. I looked up what it was - a palette of just 4 colours used at times by Swedish artist Anders Zorn (1860 - 1920). It's an oil painting palette, but the gorgeous flesh tones many have created using this palette for figure and portrait work intrigued me. I made a note to test them out some time and finally did, using gouache.

Zorn is said to have used ivory black, titanium white, cadmium red and yellow ochre. His paintings often have other colours as well, but it is this quartet that is named after him. 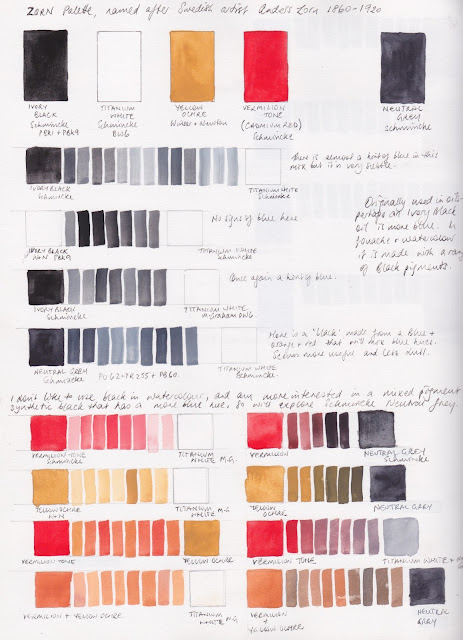 I chose to use Schmincke Ivory black, Titanium white and Vermilion tone gouache, and Winsor & Newton Yellow ochre. Not identical but similar.

In the oil paintings, the ivory black mixed with white created a slightly blued grey. I tested the Schmincke black and white and there was a slight hint of blue in the mix. I then tried Winsor & Newton Ivory black but that didn't look blue. I tried mixing with M.Graham Titanium white and still not really blue. But I also have Schmincke's Neutral Grey, made from a red (PR 255), orange (PO62) and blue (PB60) mix so I tried that - quite nice blue undertones and I escaped the dreaded black pigments :-)

Using the Neutral Grey rather than black, I mixed up a range of colours with the yellow ochre and vermilion tone. Lots of interesting flesh tones. 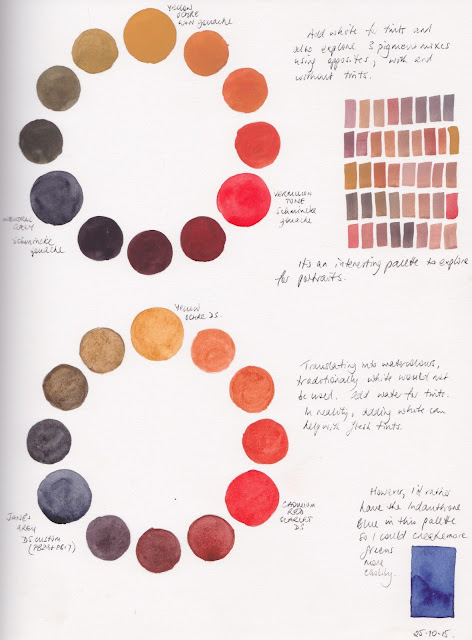 I then wanted to see whether I could actually get some greens with this mix, so I made a colour wheel with the yellow, red and grey. Purples wouldn't be possible but very neutralised greens were. I explored some random mixes using these three with white.


Translating these colours into watercolour, I switched to DS Yellow Ochre, DS Cadmium Red Scarlet (discontinued but I still have some) and my Jane's Grey to keep away from black.
In watercolour the white of the paper is usually the white and adding water rather than adding white creates the tints, though with this palette I would probably add white watercolour if I were actually using it for flesh tones. It makes some interesting mixes and might be fun to paint with but since there is indanthrone blue in the gouache mixed grey and ultramarine in my mixed grey, I'd rather add a blue than a grey and be able to make an even greater range of colours.

Fun to explore - maybe more later if I try painting with this palette :-)
Posted by Jane Blundell at 12:38