I painted a number of watercolour swatches in January 2013, cut them in half, and placed half on the inside of a north-facing window for two months. I checked the samples and noted any changes. Then I put the exposed sections in plastic sleeves and stuck them to the outside of a north facing window, and scanned them in October after a total of seven months. I reported on them here.


I returned them to their north facing window, which is a pretty harsh environment for watercolour, and have just scanned them. Note I am in Sydney, Australia, so that is the same as a south-facing window in the Northern Hemisphere, though Australian sun is very harsh. The biggest changes happened during the first seven months. Not much further change has occurred.

Sheet 1
The first row is all fine except Aureolin, PY40, which should not be used as a watercolour. Notice the light wash is now creamy and not yellow at all. The mass-tone is dull and greyed. 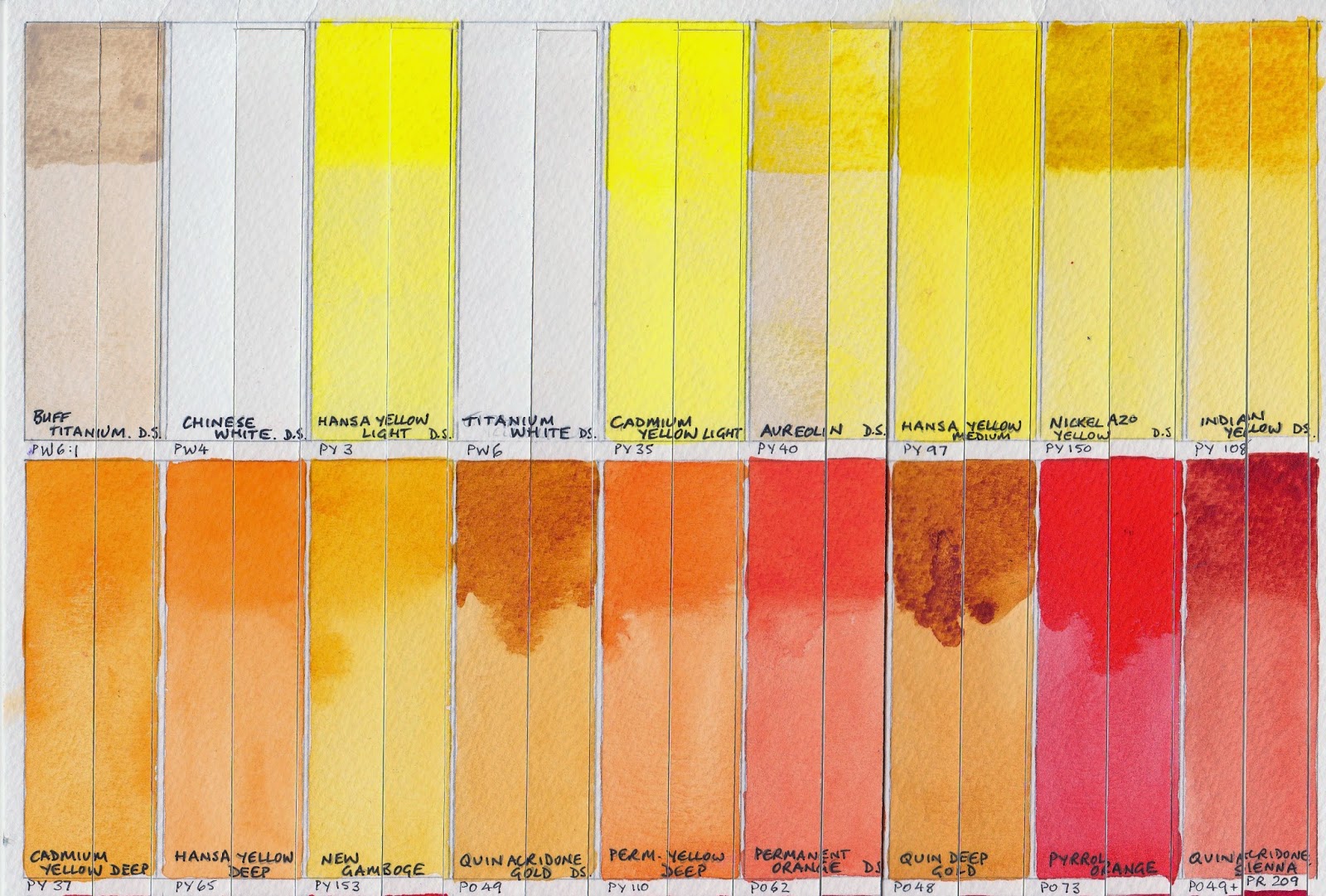 I couldn't see any change in the bottom row of the first sheet. All Daniel Smith unless marked otherwise. 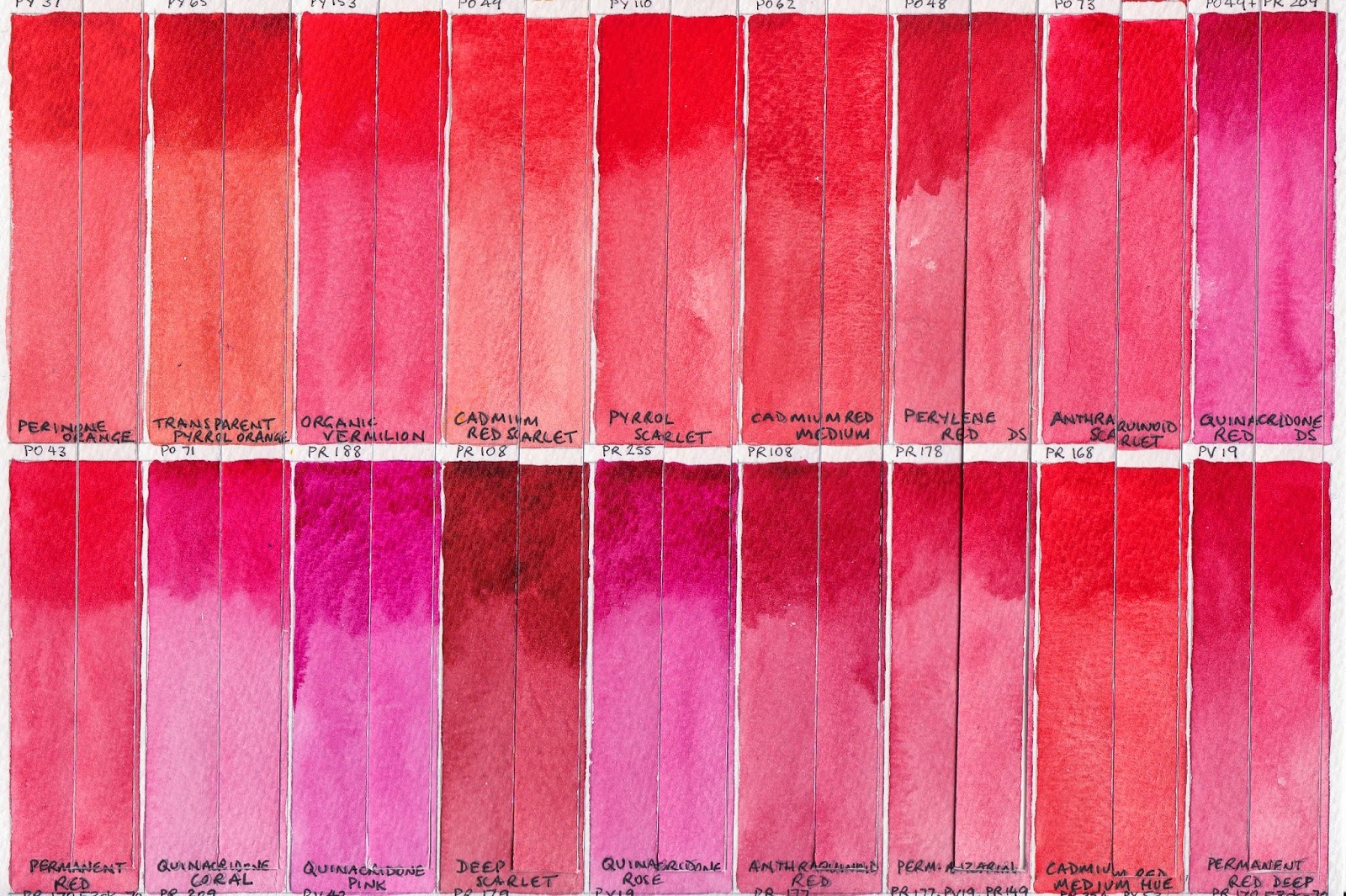 The bottom row of sheet 2 also looks fine. I expected a possible change in the last one, Permanent Red Deep, but can't see any. As before, Quinacridone Rose looks different on the screen but not in real life. This is true of Quinacridone Coral and Quinacridone Red as well, so I guess there is some change but not one we see, or a slight difference in the angle of the sample in the scanner.

Sheet 3
The top row of sheet 3 had Opera Rose as my control as I expected this to fade, just as I expected Aureolin to fade above and the crimsons to fade below. There is only the slightest loss of brightness in the original though so far. The scanned colour looks much more dull as the scanner doesn't pick up the florescent dye. Rhodonite has continued to dull, but so has the sample that was in a draw unexposed to light as apparently it is exposure to oxygen that changes the colour of rhodonite. 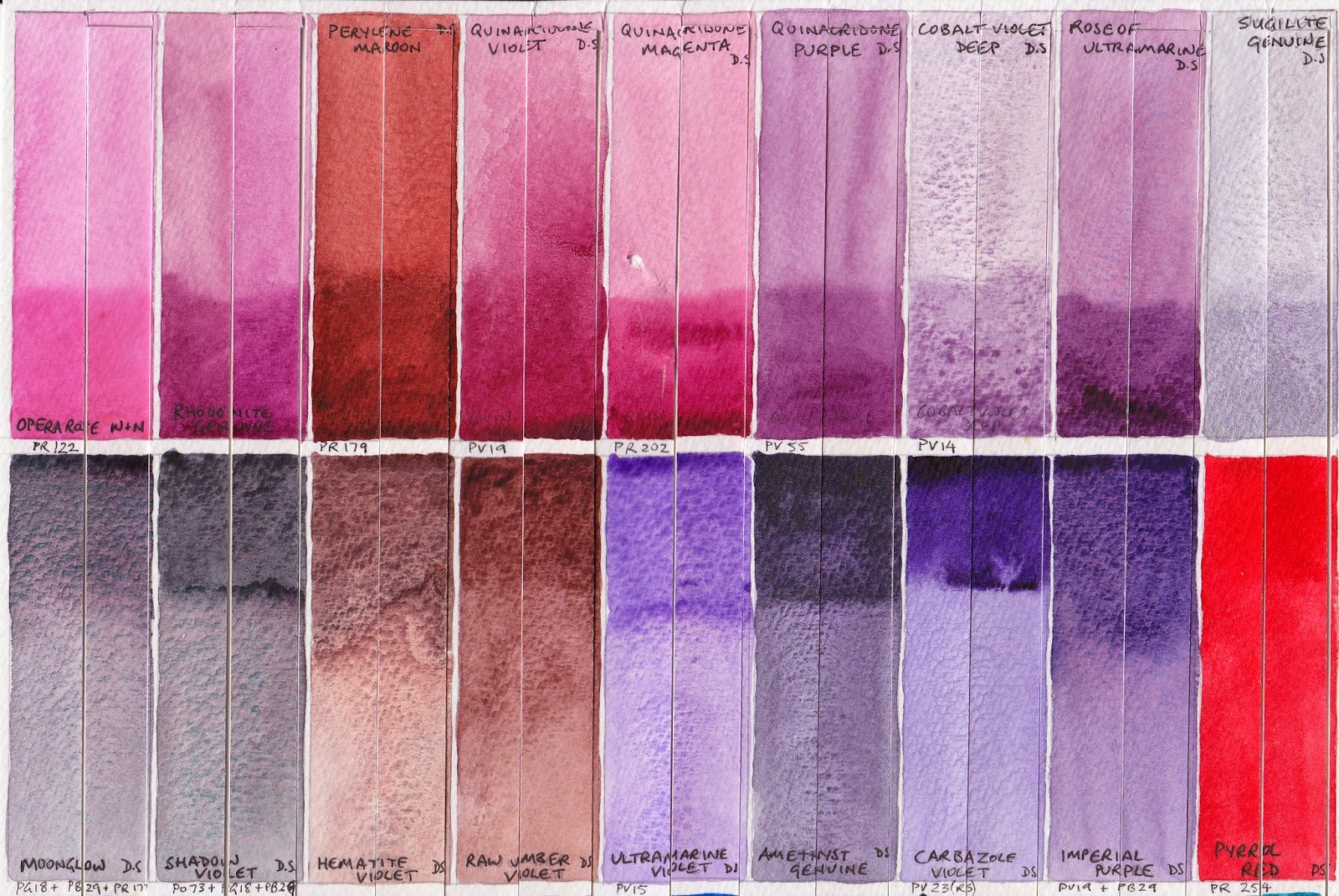 On the bottom row, all samples seem unchanged.

Sheet 4
All the samples on the top row seem unchanged. 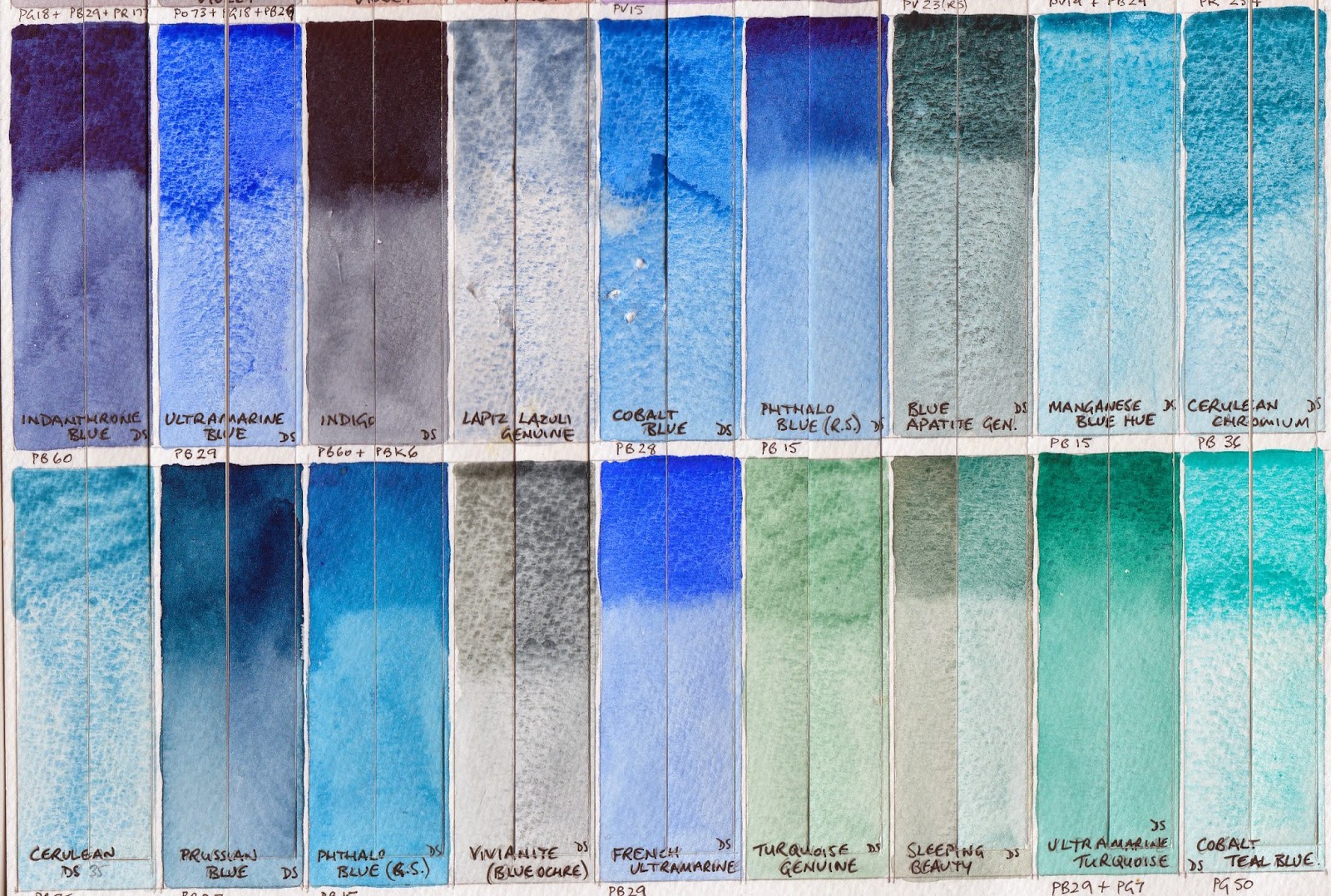 On the bottom row, Prussian blue PB27 has faded, as noted after the 2 month and 7 month scans. Vivianite has lost some more of its 'blue' hue. Kingman Island Turquoise Genuine has faded slightly and Sleeping Beauty Turquoise Genuine has dulled down further to a grey-green from its original Turquoise. The other samples appear unchanged.

Sheet 5
I can see no changes in any of the samples in the first row. I am delighted that these wonderful Primatek green pigments have held up. 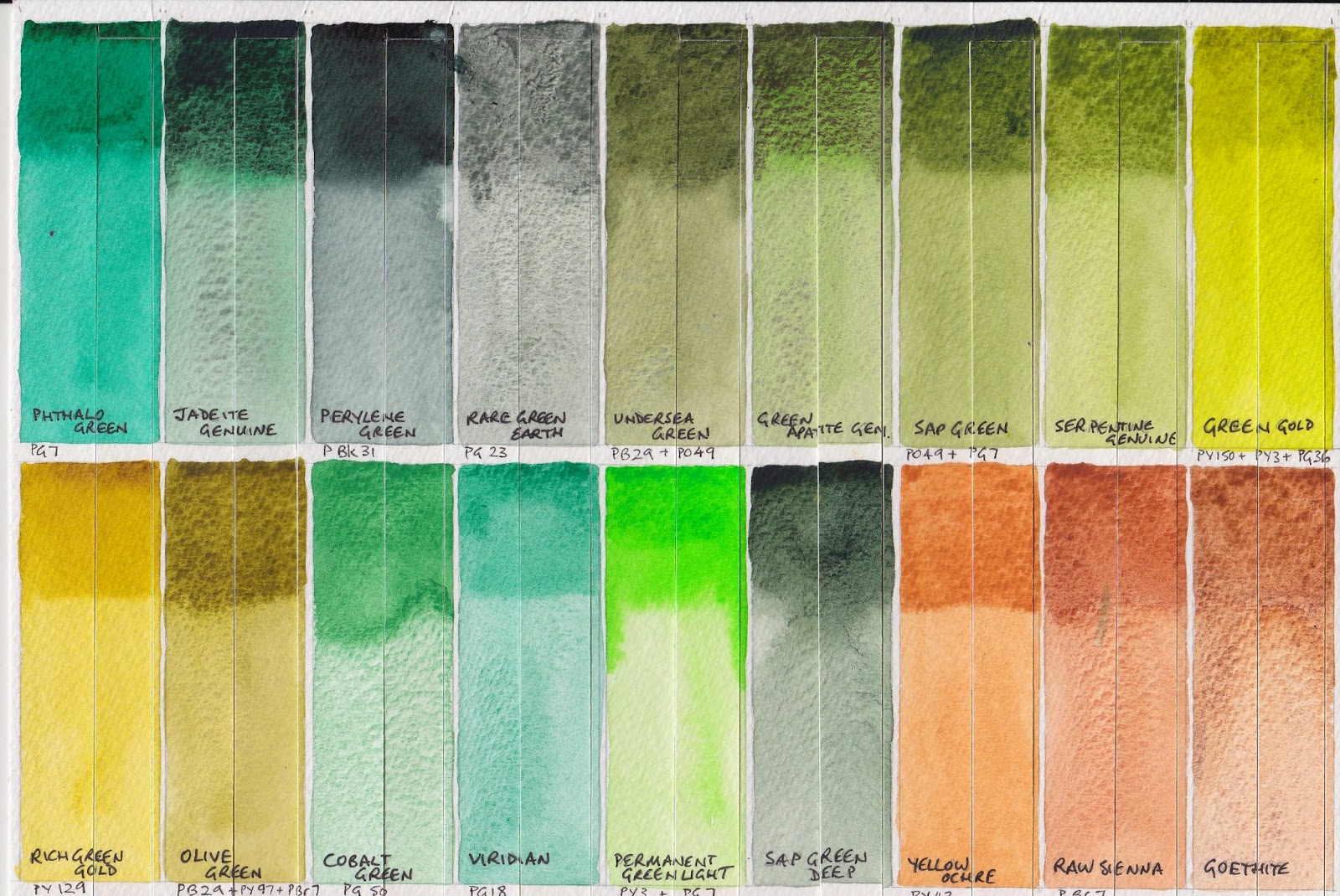 In the bottom row, all samples are unchanged. :-)

Sheet 6
All of the top row samples seem unchanged including the Primateks Hemetite Burnt Scarlet, Garnet and Piemontite Genuine. I love all these granulating earthy colours :-) 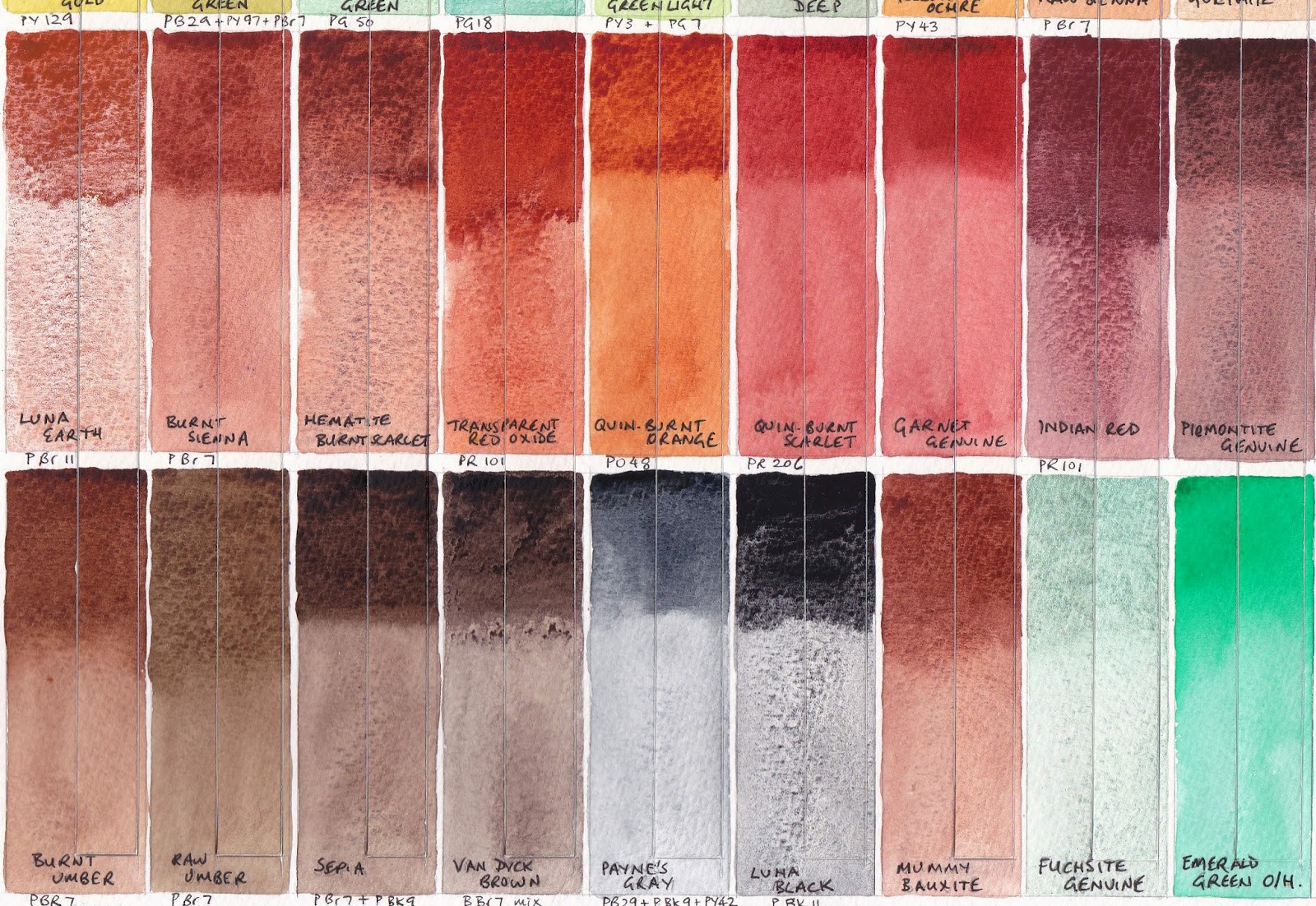 The samples in the bottom row also appear unchanged.

Sheet 7
In the top row, there is a possible slight yellowing of Manganese Blue PB33 Old Holland but it is very slight. Flesh Tint, Old Holland, with is a mix of a number of pigments, has really faded out. 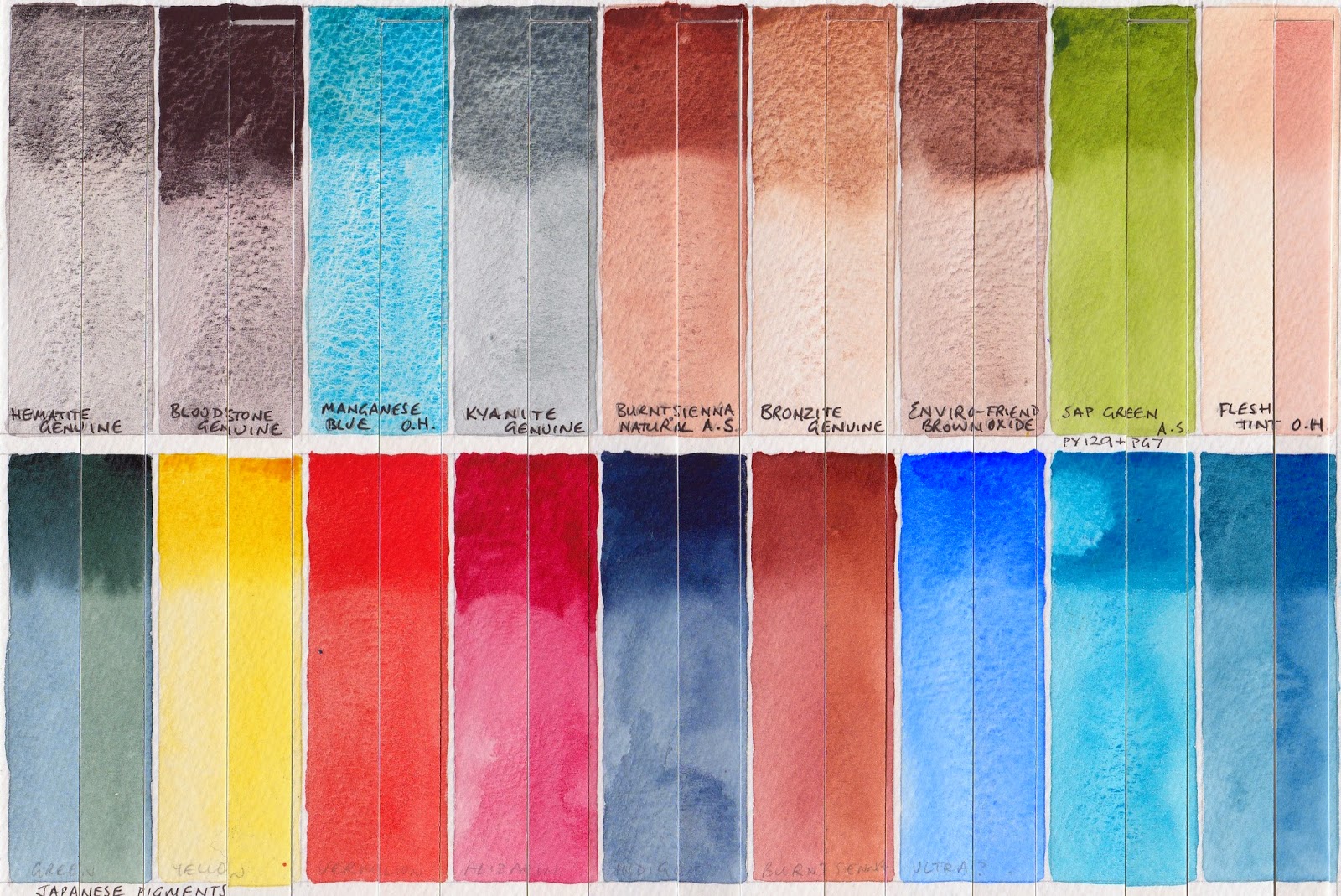 On the bottom row, a number of faded colours are obvious. These are largely unknown Japanese pigments bought in Tokyo as a fun set for sketchbook work couple of years ago. At a guess, the yellow is genuine Gamboge, which has faded. The yellow has also faded out of what was a green on the left. The vermilion is fine but the alizarin crimson has also faded. The burnt sienna must have had some gamboge in it as well, which has faded leaving an indian red hue. On the right, the prussian hue has also faded. Thank goodness these were not finished paintings! These colours may be OK in a journal where they are protected from light, but should not be used in work to be framed.

Sheet 8
The final sheet has more traditional Chinese pigments that were bought as pellets many years ago in Hong Kong. On the bottom row you can see that once again the genuine gamboge yellow has faded badly, as has the indigo. The vermilion red has faded a bit, the alizarin crimson a lot and the bright red has faded in the lighter wash. Even the burnt sienna has faded in mass-tone. I don't know what these pigment numbers were but it is interesting to see what faded watercolour looks like! It is no fun in a finished painting. 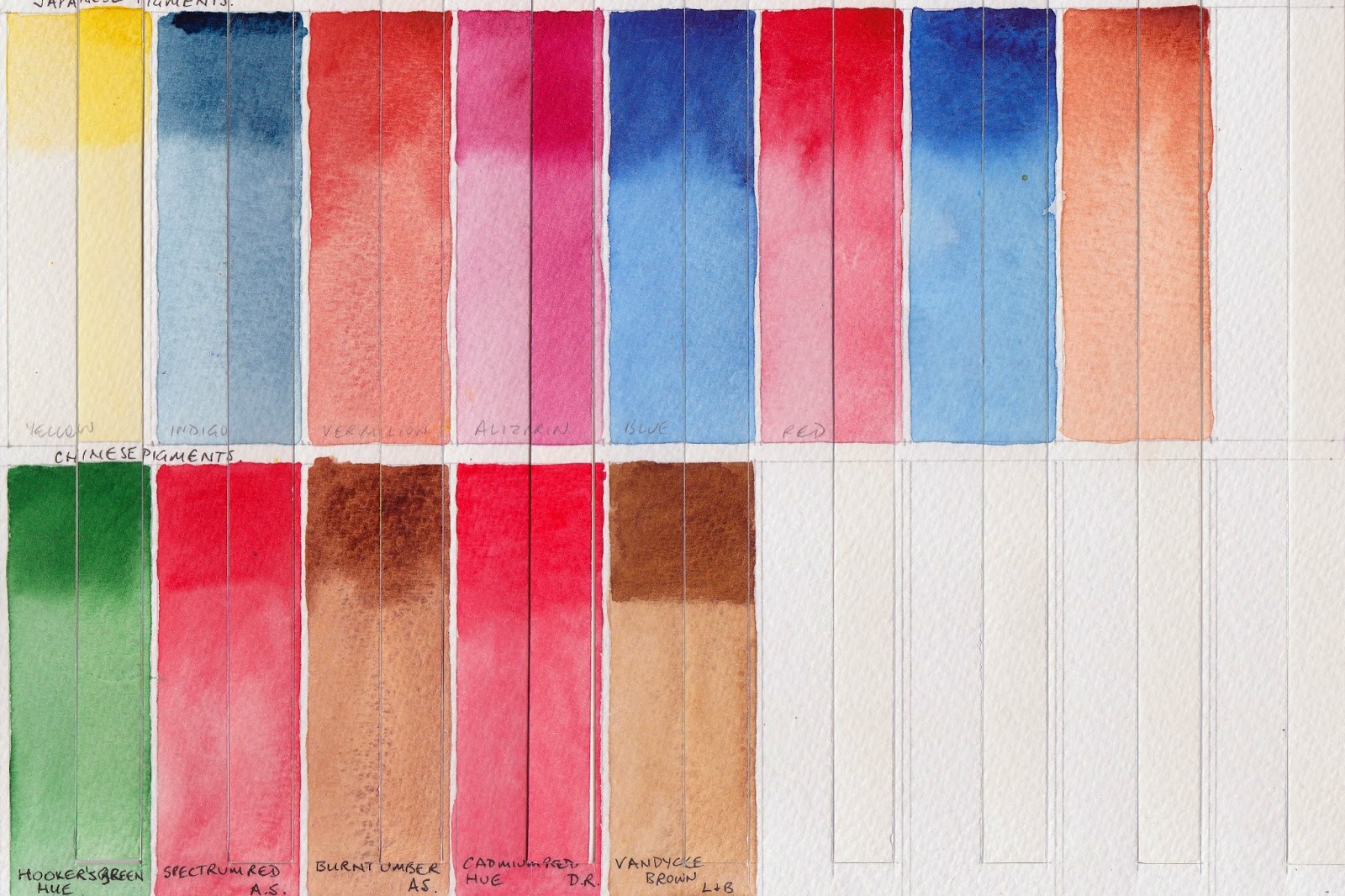 On the bottom row, the watercolours by Liquitex, Art Spectrum, Daler Rowney and Lefranc et B all appear unchanged.

It is a very valuable exercise to do a light-fast test of the colours you use as the manufacturer's labels may not always be accurate. Keep away from PY40, PR83 and, it seems, PB27.

September 2014 update: My other lightfast tests, using the colours I have chosen for my palette and other extras, were reported here. They have continued to hang inside my window and I see no changed in any of these colours. Whew!