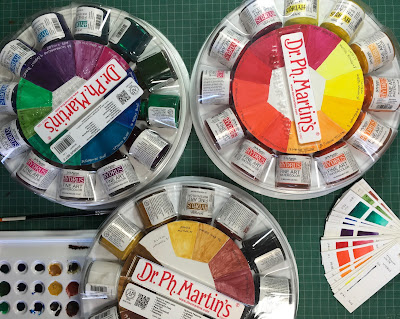 One of my lovely students, Sakshi, lent me a full set of Dr. Ph. Martin's Hydrus watercolours to test, which was great as they claim to be a range of pigmented lightfast liquid watercolours. Not something I am particularly interested in using necessarily, but interesting to try. I'm curious how they differ from working with pigmented inks.

They came in 4 sets of 12 bottles. Three sets are standard watercolours and the third is Iridescent watercolours. I'll concentrate on the 'normal' watercolours first and I will add those later...


When Sakshi first painted them out, the colours were mostly reasonably smooth, but some have changed quite dramatically over time and had separated in the bottles. I've photographed her original wheels to show the difference (see below).

Some bottles had pigment and lightfast information on them, but some didn't at all.

I have photographed them in a logical order, though not in the sets they were purchased in. As always I have tried to capture the correct colour and will note below how it differs on my screen.

The Hansa yellow light is a bright cool yellow, the Hansa yellow medium a clean primary yellow. Gamboge is a very warm two pigment mix -  brighter and slightly more orange than it appears on my screen. Hansa Yellow Deep and Chrome Yellow are almost the same orange-yellow hue. Rather like PY110 often looks.

Crimson lake is also very similar to the crimsons above. PR269 is rated III so not lightfast enough for watercolours. The Quinacridone magenta is a lovely colour but the Quinacridone Violet wouldn't paint out nicely. Nor would the Ultramarine red violet. Cobalt violet looks very like a PV23 but no information was given. Ultramarine does not contain PB29 but a mix that is more like a phthalo blue red shade in hue.


Cobalt blue looks like another phthalo pigment - it is certainly not PB28. Phthalo blue painted out nicely. As did Turquoise blue. Blue aqua could do with more blue in it be different enough from Phthalo Green. Sap green separated badly and was very odd.


Here are the colours as painted out when the paints were first purchased. Some look a little streaky even at this stage. She has arranged them into her own colour sets so this is not a set as it would be purchased.


The 4th set is the iridescent colours. I'll admit that am not as interested in iridescent watercolours, though I realise they are of value to many, especially calligraphers.

Liquid watercolours can be used in the studio of course, and it is easy to create repeatable recipes since they come with an eye dropper. They can also be used to fill water-brushes so they can be used on location. I know of one sketcher who had a water-brush filled with yellow to keep that colour clean. Another uses a range of greys. Otherwise, like inks, they are more risky on location as they can obviously spill.

I allowed my samples to dry and attempted re-wetting them without satisfactory results so they are best used fresh from the bottle.