I missed out on a week of turquoise, which would have been the next logical colour, but added it in later. There's a fine line between a greenish-blue and a blueish green - when do they become turquoise/aqua/teal? And it's the same with the opposite of turquoise - a red-orange vs an orange-red, though there is no name for the in between colour.

There are many mixed greens available but I focussed here on more of the single pigment greens. I love the granulation of the Daniel Smith Primatek colours Green Apatite Genuine, Jadeite and Serpentine Genuine. I included DS Undersea green, even though it is a two-pigment mix, since it is one of my favourite convenience greens. I also included the DS Sap green - and other lovely useful hue.  Chrome green is an interesting more opaque green - not one I've used very often though I like it. Rare Green Earth is only just a green shade of grey - a gentle landscape green, that could be used in distant mountains in a landscape. 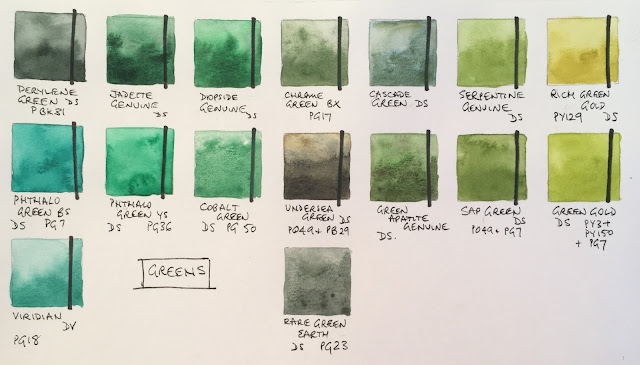 Greens can be neutralised by adding a red, though whether a warm or a cool red depends on how yellow or how blue the green happens to be.

For more greens, see my website here.
Posted by Jane Blundell at 01:04