I painted a number of swatches of as many colours as I could find back in January, cut half away to store in a dark drawer, and placed them in a north facing window for the last 7 months. For the first two months they were inside the window, for the next 5 they were stuck on the outside protected only by the plastic sleeve they were in. There was almost no change at all after the first two months, but a bit more now.

First are photographs of each full sheet. They are too large to fit the whole sheet in the scanner, which was not very thoughtful. Next time - A4 sheets!

Then I will go through each scanned section so you can see what colours faded and which have remained - so far. 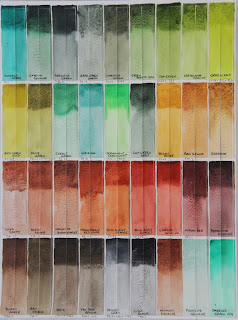 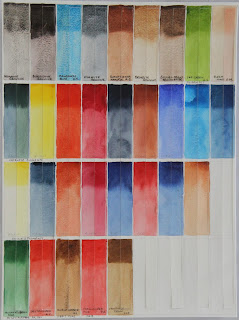 So the main problem colours are PY40 Aureolin, Chinese and Japanese yellow, Prussian Blue, a number of Primatek colours (though MANY are fine) and some crimson reds. Surprisingly, the Opera Rose has not faded as expected...yet. I'll put them back in the window and report back in a few months.